A nice start to the day as we climbed 1,000 metres into the Middle Atlas mountains and arrived at the town of Ifrane. Getting off the coach we were surprised to find the temperature nice and cool, and the area is known as little Switzerland in Morocco - possibly.

There used to be lions roaming in Morocco, but no more. However, the country's football team is known as the Lions and there was a good statue. 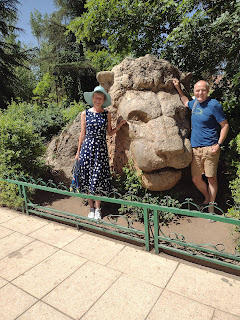 Next was the monkey stop to see macaques in the cedar forest. These are the same type as in Gibraltar, so I stayed on the bus. Daz was braver though. 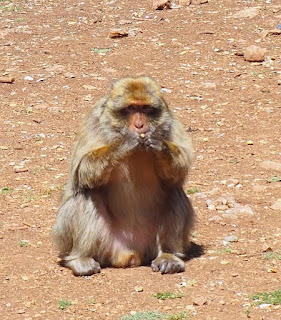 We then descended back into the desert and the heat, and the long drive east. Along the way were lots of villages, and to cope with the intense heat the houses were single story, with tiny windows and made of mud, so the same colour as the desert. 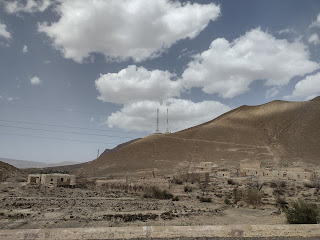 Nearly all with electricity and satellite dishes, so hopefully pleasant inside.

We stopped at an oasis. How big do you think it was? I would have guessed a little pond and 20 palm trees. This one appeared out of nowhere and had many villages and 50,000 palm trees. 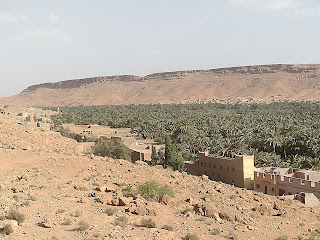 Further on still, through an area that 350,000,000 years ago was under the ocean, and as a result has loads of fossils. Darren bought one for me from a roadside stall. 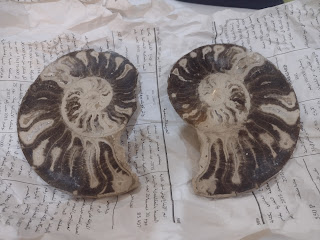 It is an ammonite split into two and polished. He is insistent that it's a fake from a factory, but I know that it's real and lovely so I don't care.

Further and further on and then we get to our hotel. A beautiful traditional building with rooms around a courtyard. 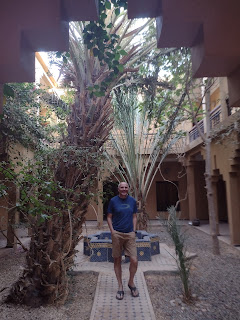 Surprisingly for the desert our room smells quite damp, and it's very dark inside, but the aircon works which is good as it is roasting outside.