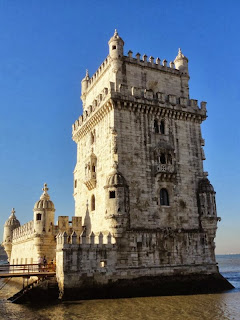 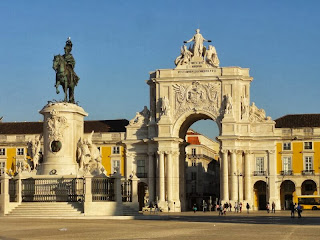 Got up early today to watch the sunrise and see the ship dock in Lisbon.
We got the bikes out and followed the waterfront down to Belem to see the Monument to the Discoveries, which commemorates the quincentenery of the death of Henry the Navigator.
The next stop was just along the coast to see the Torre de Belem. This five story fortress was built in 1515 and stands in the water,  so that prisoners in the dungeon were submerged up to their necks at high tide.
We then followed a bike path along the coast to the beaches of Estoril and Cascais. It looked so inviting that I had a little paddle. Good but a bit nippy.
Finally, we followed the path back and stopped in Black Horse Square. It was named this is the 19th century by the British who lived here, but it has now been scrubbed and is green.
47 kilometres of nice flat ground, but too many cobbles for my liking.