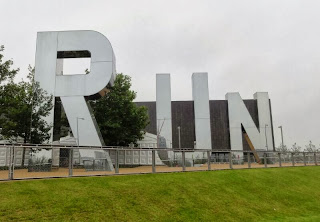 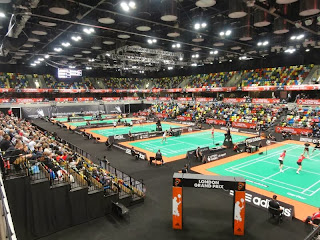 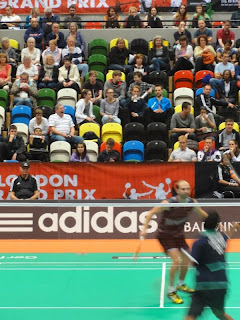 We have been spending the last two days at the Copper Box, which is on the Olympic site at Stratford.
We wanted to get inside it during the Olympics but couldn't get tickets. So we are making up for it now by watching the London Grand Prix Gold badminton tournament.
It was all a bit confusing yesterday as we got to the Box, which mysteriously had the gigantic word 'run' in front of it. I don't know where the running takes place, but not in the Box.
Anyway, there was also a sign with an arrow pointing around the corner to the entrance, so we followed it for quite a long way, and then had to retrace our steps as the entrance was just to the left of R. A line of people behind us all did exactly same thing, so we weren't just being a bit dim.
Inside the Box is imposing - black and square with hundreds of brightly coloured chairs surrounding the centre.
It took me ages to remember what they reminded me of, and finally I got it - ludo counters.  Just now I am sitting on a yellow counter and Darren is on a white one.
Badminton is not bad either.