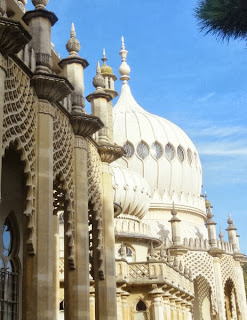 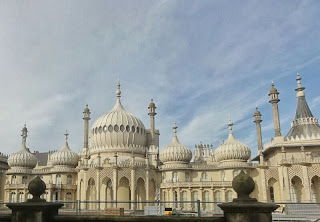 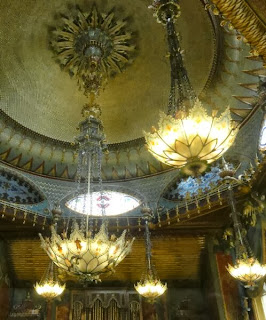 King George IV built the Royal Pavilion in the early 1800's. It is Indian in style on the exterior, and Chinese inside. He never visited either country, but just thought that they were exotic places that would look good in a building.
He spent a fortune on completely over the top decorations and was always in debt. He was also very unpopular with his subjects because of his extravagant lifestyle.
He often hosted dinner parties where over 60 different dishes were served - including swan, song birds and other weird delicacies.
His niece, Queen Victoria, didn't really like the Pavilion, so she eventually sold it to the local Council. They have looked after it very carefully ever since, which is why we were able to visit it today.
No photography was allowed inside so I couldn't get a pic of the 30 feet high chandelier that is attached to the ceiling by an enormous silver gilt dragon.
I did manage one shot of the Music Room ceiling,  but was almost caught by one of the guides, so if you want to see more you will have to visit.