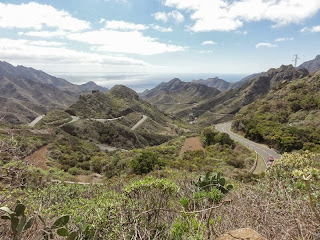 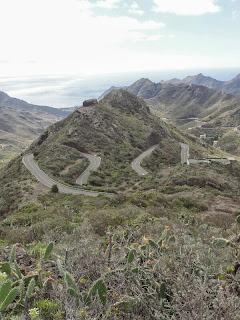 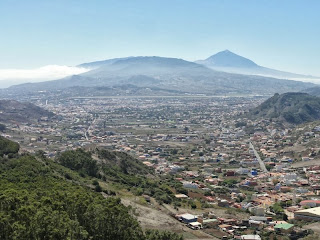 I was in two minds when we arrived at Tenerife this morning. Should we catch a tram to the local town and have a lazy day, or should we have a bike ride?
We found a round trip cycle route that we thought might be a bit hilly, but should be a nice bit of exercise, hopefully with pretty views, so we went for that.
We also knew that a lot of the professional cyclists on the Tour de France do their winter training locally, so we would be in good company.
We started with a flat, easy 10 kilometres along the seafront, and then it was a steady 21k climb that took us along all of the roads in the first two photos.
It was beautiful, but also never ending, and we kept thinking after each corner we would reach the top. Eventually we got there, but not before Darren's legs were shaking and I was considering crying.
We then cycled along the ridge at the top of the mountains where we could see right down to the sea on both sides.
The downward ride through the trees was brilliant, although, just like in the Tour de France, I could have done with a newspaper to put down my teeshirt as it got pretty chilly.
Fantastic day overall, although it was easier to appreciate it once we were back at sea level.