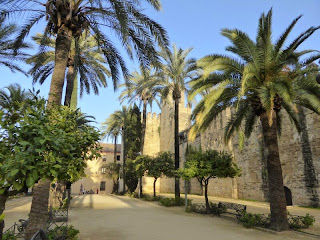 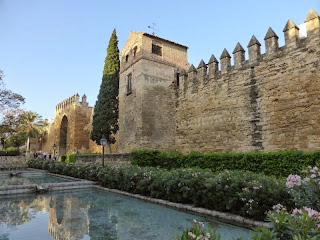 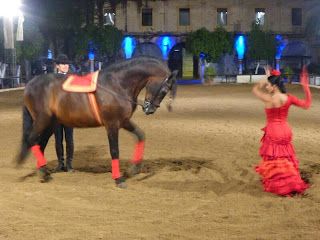 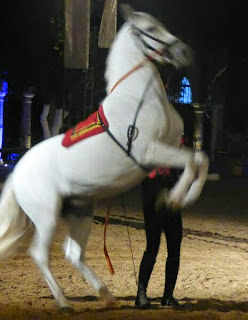 After a little siesta we headed into Cordoba. It is a stunning town with many amazing ancient buildings. We walked into town besides a very impressive walled fortress and castle.
We intended on having dinner in a little bar and then heading home, but we saw a sign advertising an Equestrian Show, 'The Passion and Spirit of Andalucian horses at the Royal Stables in Cordoba'. Who could resist such a spectacle?
We arrived early so managed to get front row middle seats, so all was looking good. The building was also beautiful, a large oblong courtyard with the stables all around the outside. There was mood lighting everywhere and the crescent shaped moon hung brightly above us.
The show started and a nicely costumed man brought in a big brown horse on a long rope. The horse kept running round in circles and the lady behind me let out a long 'ooooh'. I was actually thinking that it wasn't very exciting, but then, what more could a horse do?
The answer came a few minutes later - it could dance the flamenco - sort of. The music was nice and loud, the seniorita was twirling and stamping along in time. The horse was also stamping and jumping around, with the help of his hombre. He wasn't in time with the music, but when it ended a man behind me shouted 'bravo!' just as I quietly muttered 'weird' to Darren.
There was also quite a few other horses, with men on their backs, who could jog sideways, trot with their legs sticking forward (a bit like Basil Fawlty), do handbrake style turns, gallop at full speed and then stop dead.
As a non horse rider it was difficult to know if these things are difficult, but when one of the horses walked off backwards, I decided they must be.
Also, in the very difficult category was a horse balancing on two legs. I don't think they particularly liked doing it either, but it made me realise how massive the horses actually were, and the crowd enjoyed it.
Overall an interesting night, but not necessarily an experience that I will rush to see again.
Ps, Daz summed it up with the comment 'it was a bit too horsey for me'.