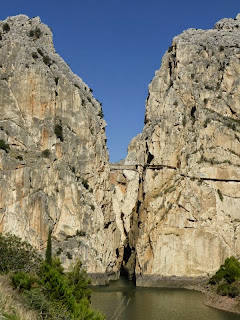 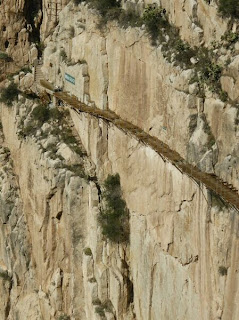 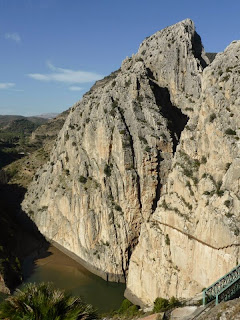 A few days ago we saw a poster at the train station advertising stops a beauty spot called El Chorro. It looked pretty spectacular so we decided to visit.
The train was very efficient and dropped us, along with four other tourists at the station.
Unfortunately, there was then no signs or tourist information and non of us knew where to go. We wandered in random directions, but eventually we all headed downhill and round a corner as that way looked the most promising.
I had read that we would see a lake, vertical cliffs, a hydro electric power plant and the ruins of the Carminito del Rey. Initially we could see the first three attractions, but really we wanted to find the C del R.
You can look it up on YouTube, and it is a metre wide walkway attached to the cliffs by metal rods. It is about 100 metres above the lake, was built in the early 1900's by the owners of the hydro electric plant and was used by workers at the plant to get to work.
It gradually fell into disrepair and it was closed in the year 2,000 as 5 people fell to their deaths from it at that time.
Since then a few climbers have managed to get on to it, and there are crazy videos showing sections with huge holes and missing handrails.
However, it is now being repaired and is supposed to open again early next year.
We eventually found a pathway that took us up on to the mountain opposite so that we got great views of the path, the beautiful scenery and the workers doing the repairs.
I won't be rushing to walk along it when it reopens, but the area is incredible and totally different to the nearby coast.