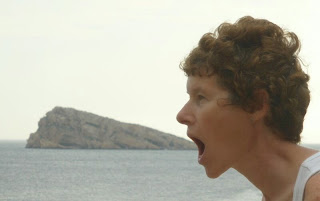 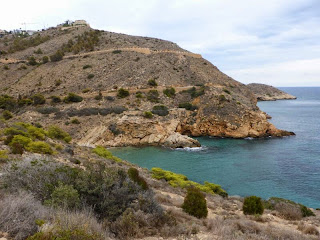 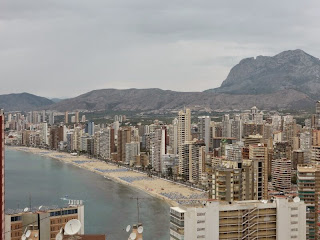 Bit of a cloudy day today, so much better weather for exploring. On TripAdvisor I saw a highly rated review of a cross on the top of a hill, with great views over the city. I decided that we should go and see it.
Unfortunately, although we could see it in the distance, we walked up and down lots of streets but couldn't work out how to reach it.
We met two British couples who were also trying to get to it, and we swapped notes, they had tried different roads to us, and then went off in opposite directions. (We never saw them again.)
After quite a long time we decided just to give up and enjoy the views that we had found. Almost immediately a Dutch family came past and told us that they had reached the mythical cross! They were keen to tell us how they got there, but we had lost interest by then.
Instead we spent a bit of time photographing the Benidorm rock. It is out in the bay and is supposedly the symbol of the town, but it looked quite unexciting and just like a piece of comedy cheese.