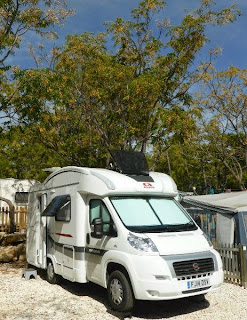 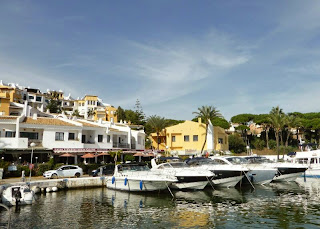 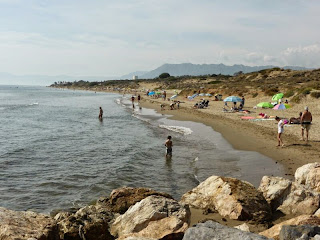 Our poor little campervan is putting his wheels up and having a well earned rest for a few days. In just five weeks he has transported us from the very top of Scotland to the bottom of Spain.
Over 4,000k with not a hint of a complaint, although maybe a tiny bit slow over some of the steeper hills.
The same couldn't be said of the sat nav as we have had some spectacular rows, and I developed a possibly irrational hatred of it.  I won't go into it all now, but I think it behaved fine when Darren drove but as soon as I got in the driving seat it veered off onto the narrowest and steepest roads possible, all the while pretending to take the shortest route.
It is forgotten and maybe forgiven now we are here  though, so I am going to try to make friends with it. Maybe I should buy it a bunch of flowers and some chocolate, and if it doesn't eat it then me and Daz could help it out.
We are parked at Cabopino, which is midway between Marbella and Fuengirola. We are a five minute walk from the seafront and it is very pretty.
It is also nice and hot and sunny, and we are taking it easy today as we went to watch a flamenco show last night and the wine and sangria was just a little too tasty.