Giselle at the Royal Opera House 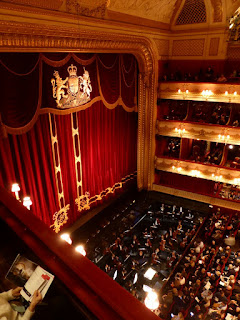 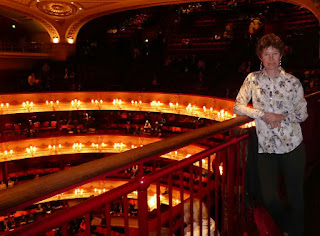 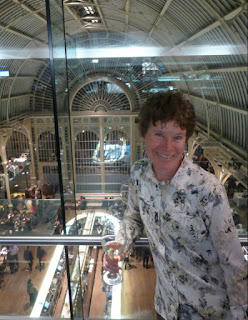 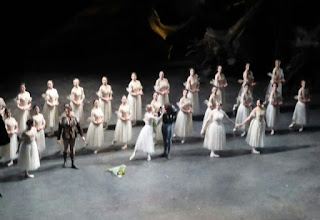 It was only a ten minute walk from the National Gallery to the Royal Opera House.
This was our second incredible building of the day and we were there to see the opening night of the ballet called Giselle.
We had the cheapest tickets in the house and we were quite close to the stage, but very high above it.  You can see from the first photo that we could only see just over half of the stage. We also didn't have a seat, although there was a very nice railing to learn against.
Once the curtain opened we realised that we could see even less of the action than we expected.  The stage was very deep and the dancers spent a lot of their time either at the back of the stage or at the front on the left out of sight.
We often couldn't see anybody at all and it was both frustrating and funny. It also made the plot very difficult to follow, and we completely missed the climax of the first act where Giselle kills herself with the Prince's sword.
It was then time for the interval which was lovely, and a small glass of wine cost more than our standing ticket.
Back for the second half and it got much better, with a whirlwind of ballerinas racing on tip toes across the stage. We could only see half of them at any one time, but they elegantly and energetically floated around.
Every now and then the Prince would appear and they chased him around in a huge flock.
Giselle also reappeared as a ghost and they did a beautiful dance together.
Unfortunately, we missed the finale as we didn't see them for a while and then the curtains closed as the Prince was running round on his own.
The audience clapped loudly and we walked down to a lower floor where we saw them all for the first time and I took a photo of the encore.
An excellent nights entertainment at a budget price, although with rather tired legs.