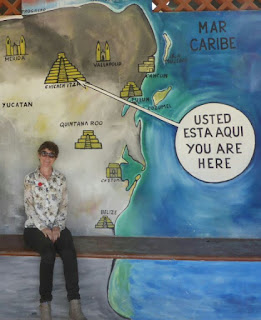 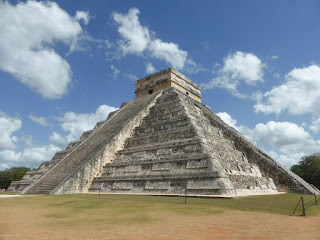 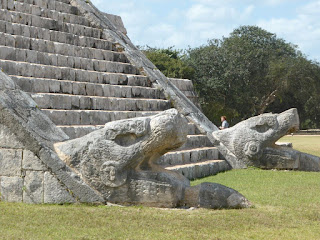 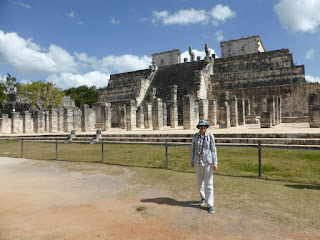 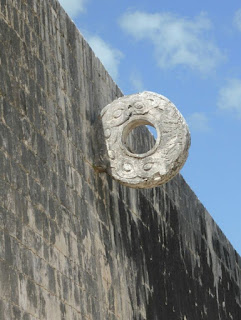 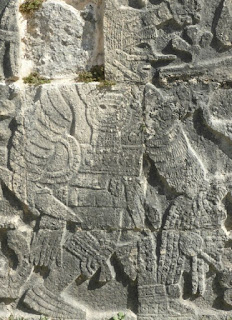 Chichen Itza was an ancient Mayan city, and is one of the main reasons that we came on this whole cruise.
We were on a trip from the ship and it was staffed by local guides who were working as they called it 'on Mexican time.'
This meant that we left half an hour late, and then stopped for an hour at the gift shop - guess who would get commission on any sales. However, once we arrived at Chichen Itza, they quickly said that we only had an hour and a half to look around - definitely not Mexican time any more.
Determined to make the most of our time, we set off after the guide.
First stop was the Pyramid of Kukulcan, and it was used to track the stars in the night sky. The Mayans were extremely knowledgeable about astronomy and followed a hugely complicated calendar system.
There was also two giant snakes heads at the base of the pyramid, and on one day per year, the angle of the sun made shadows against the steps that looked like slithering snakes. Not on the 2nd February though, but the 21st March.
Next we saw the temple where human sacrifices were made to the gods.
Finally, we reached the ball court. This is the place where a very weird game was played.
There was a ball and seven players on each side. High up on walls on either side of the court were two hoops. The aim of the game was to score by getting the ball through the hoop. So far it sounds a lot like basketball.
However, the similarity ends there as they weren't allowed to throw or even kick the ball, but somehow manoeuvred it with their hips.
Eventually, one side though would score - and the captain of the losing team would then decapitate the winner.
Yes, I have definitely written that down right, and it was supposed to be a great honour, as the winner would go straight to heaven!
There were carvings all around the court explaining the game and pic 6 shows a player with a severed head from the opposite team in his hand.
Ps, no tip for the guide today!