The weather was supposed to be okay yesterday, so I had high hopes of finishing the fish. It started to rain a bit, but I decided that it was only a shower so mixed up a good sized bucket of mortar.

The weather had different ideas though and it started to pour down. Getting soaked I rushed to put in some bricks and then raced quickly down the path. Foot in mid air, I rememberd that Darren had put in an extra step on the path and there was wet concrete under the slab.

I tried really hard to avoid stamping down on it, but it was too late and I hit it near to the edge. Even worse, Darren was watching from the kitchen so I couldn't even deny it.

Today I relaid it and there is now a bucket on the top so that I don't do it again. 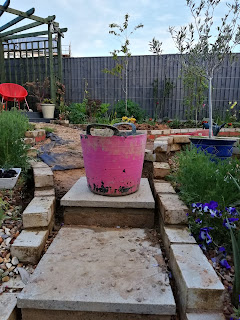 Anyway yesterday, it then rained constantly for about six hours and now our fish is almost surrounded by water. 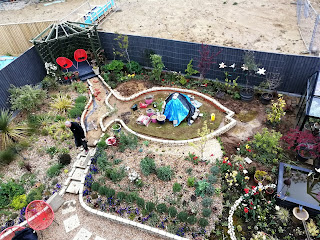 Slight exaggeration, but his head is definitely very wet.

Fortunately today it was dry from about 11am onwards, so I have finished the brickwork on the fish and the path up to the pergola.