We stayed overnight at Stratford upon Avon and went for a wander around the town this morning. Everywhere you look William Shakespeare manages to appear, and here he is with me clinging on to his ankle. 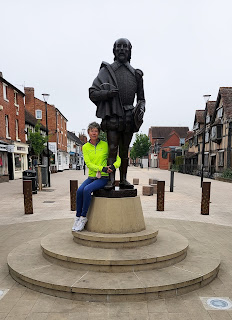 We then walked along the river and I wondered out loud 'which river do you think this is?', Darren thought this a trick question, but I was thinking of the Thames. As he then helpfully pointed out, the answer is in the name of the town.

Thicko of the day prize for me, and I then proved it again by having a very strong opinion of the route out of town, even though I didn't have a map. Everyone nicely humoured me and we set off down my choice until it became obvious that it was actually completely the wrong way.

Once we were on the right route we made good time and rode 25 kilometres before the first coffee stop. 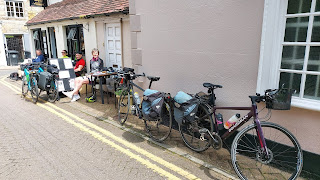 After the stop the route became very undulating, and then we found a ford that cheered us all up. 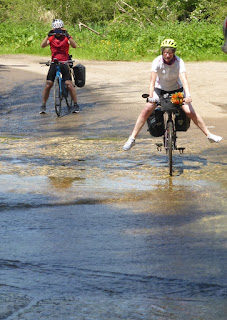 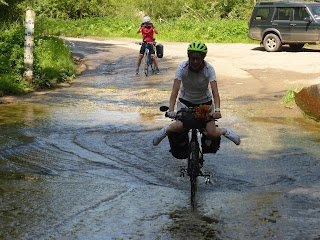 We stopped for lunch at Great Tew, which is a beautiful and very expensive village in Oxfordshire. It is also the home of the very famous and celebrity filled Soho Farmhouse. Non of the others had heard of it, obviously I haven't been to it, and I don't have a photo of it, so a bit of a non story really.

The lunch was great though and we had a picnic on the grass overlooking beautiful thatched roofed cottages. 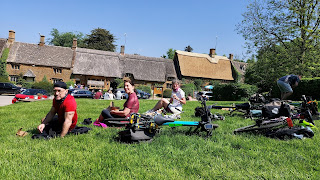 We decided to have an ice-cream on the final ride back home but we didn't find a shop until we had only a mile left. So we sat on the pavement steps in Bicester town centre, had our cornets and then headed home for a much needed lie down.