This morning we were joined on our cycling trip by Susan and Paul.

We started with a nice easy ride to Warwick and then played a game of find the castle. We passed the entrance quite early on, but we didn't want to visit, we just wanted a nice view from a distance.

Darren's cycling app led us on an undulating journey to a bridge in a park, but we could only just see the very top of it behind lots of trees 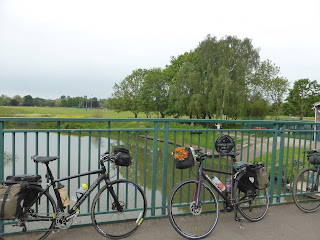 We then headed nearer to it and went down a cobbled street that turned into a dead end. This time we were right under the castle. 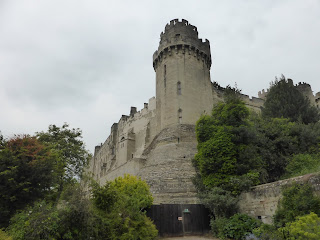 Strange angle on this picture, but definitely the castle,but again not a great view.

Losing interested, we cycled along the Grand Union canal and the incredible Hatton Locks. 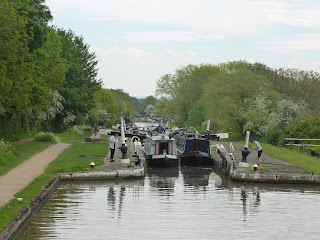 There are 21 locks in quick succession, and today there were lots of canal boats going both up and down them.

We also found the Knowle locks, and by then the sun was beginning to come out. 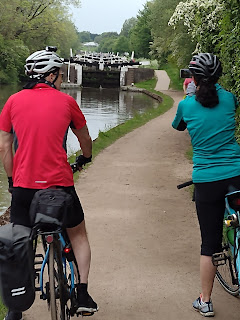 After the canal we stopped in Knowle for a long, calorific lunch before heading to another highlight - a cycle path to the end of the Birmingham Airport runway.

Surprisingly it was busy with lots of picnickers and benches. 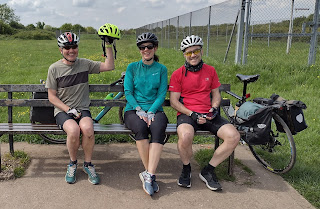 Only one plane landed while we were there and the big disappointment was that it didn't come in low overhead, but landed right at the other end of the runway, coming to a stop well before the end. 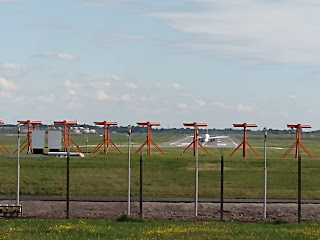 Even more disappointingly, a few minutes after we left a plane took off and it must have been really low over our bench, and we saw it climb from a few streets away.

It was then a bit of a slog to our hotel with the highlight being a trip to Halfords for a spare inner tube for Paul.

We arrived at the Premier Inn at Sutton Coldfield at about 5.30pm and the lovely receptionist was so impressed with our 70 kilometre long ride that she gave us a box of chocolates each as a present.

Excellent day and hopefully S and P will be up for much more of the same tomorrow.