So, after Darren had cleared all of the clay from behind the greenhouse I spent a morning building a little foundation wall, and shuttering it in place with bricks and plastic liner. The weather forecast was for light rain showers, but before I had finished, it suddenly started hailing with torrential rain thrown in. Twice.

Once it had stopped we went to investigate and lots of the foundations had been washed away under the fence and into the plot next door. The moral of this story is never to trust the weather forecast.

Today was a good day though as we had a delivery of two tonnes of gravel. 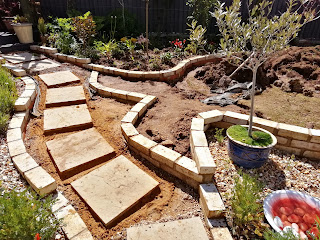 It was a busy day and some nice little jobs got finished. Darren had levelled all of the slabs to the pergola and we filled in all of the gaps with gravel.
I saw a lovely bog garden on the TV and was quite inspired by it, so we have made our own in the boggiest part of the garden instead of ignoring the problem and watching ordinary plants struggle in the mud. 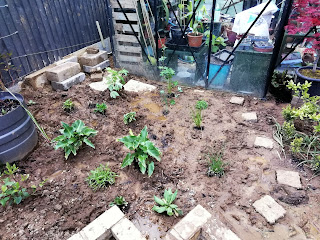 It doesn't look much yet but give it time. Also don't walk on it if you don't want to lose a boot in it.
Darren spent the morning rebuilding my foundation wall and substantially fortifying it, and it didn't rain until a few hours after he finished, so it is still looking good.
I wore myself out digging soil out of the fish shape, then filling the hole with clay, then a layer of gravel, then finally putting the soil back on top. Phew. 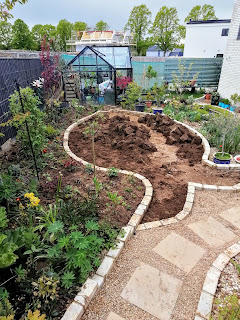 Not ready for the grass yet, but not far off.