Busy morning as we got up early and cycled through Tower Hamlets to Mile End to do a parkrun. We both got good times so were pleased,  then we whizzed back to the hotel to shower and get out for breakfast.

Darren had noticed that our hotel was near to Brick Lane and he recognised the name. I don't know if I had heard of it, but it used to be a slum, then Irish and Jewish people moved there, and now it is known for its Bangladeshi food and curries.

However,we decided to go for breakfast from the bagel shop and I had to queue out of the door for a salt beef and pickle bagel for Darren and smoked salmon and cream cheese for me. 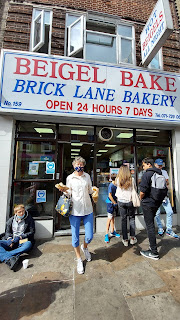 To me it also seemed to be full of graffiti, although it was very professionally done and we even came across a group of artists at work. 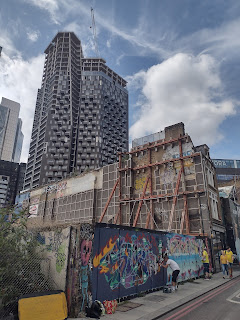 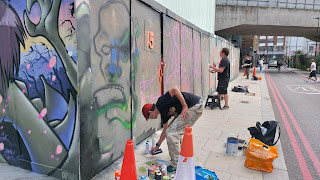 Then we went across town to the Royal Academy of Art where we had tickets for the David Hockney exhibition. No photography was allowed, but basically he has started using an iPad programme and has made a series of over 100 paintings of spring in northern France.

He managed to churn them out very quickly, sometimes three in one day, and to be honest they got a bit samey. 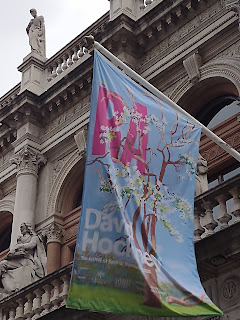 Imagine another 99 similar pictures to the one on this flag and you get the idea.

We then walked down New Bond Street which is amazingly posh, like Bicester Village but all of the shops are real and not outlets, and a sculpture of Winston Churchill in the middle of it. 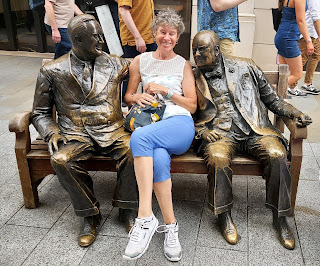 Not really space for me, but I managed to squeeze in.