This afternoon was great fun, and we saw the start of the annual naked bike ride. There was about eight separate starting points, and eventually all of the different groups met up together later on in the day.

At random we chose to see the Hyde Park start and there were many more participants than we expected. 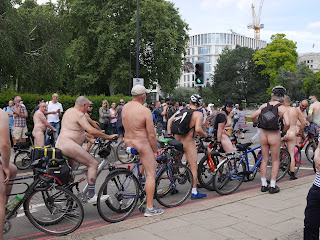 To my surprise we saw one of our friends from Nottingham on about the third row of riders. I was not sure what to do, so pretended that I hadn't seen him, but about half an hour later he sent me a photo on WhatsApp, so he saw me too.

He also put his photo on Facebook and has now been banned for three days so I won't put it on here. 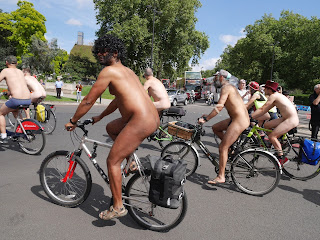 Not many sun tan lines on display.

This evening we went out for dinner to an Indian restaurant and had some interesting things. 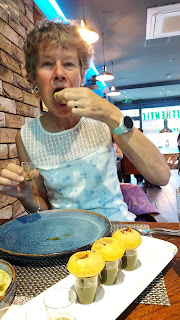 These are crispy balls resting on the top of little shot glasses with minty liquid in them. The trick is to pour the drink into the crisp and then eat it in one mouthful.

Nice dinner, but surprised that it was vegetarian because it had chicken dishes on the menu outside of the door, but when reading it more closely it was called plant based chicken, which I can't comment on because we didn't try it.