Lovely weekend with Elaine and Mark, including a trip to Oxford.

They are both avid viewers of the Inspector Morse series from the 1980's, and Darren managed to find a self guided tour of the locations of many of the scenes from the show.

Amongst others we saw the bookshop where Morse interviewed Mrs Field after the murder of her husband and the pub where Lewis trails Charlie Bennett, but we couldn't find the ironmongers that Lewis visited to ask about Anne Stavely's keys. 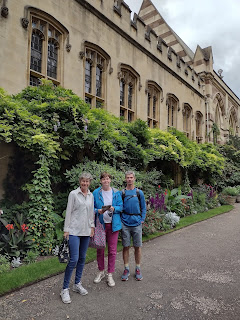 In the following photo Elaine and Mark are doing some investigating of their own and wondering what the tomb like structure was in Balliol College grounds. After a bit of deliberation there was no definite conclusion. Where is Morse when we need him? 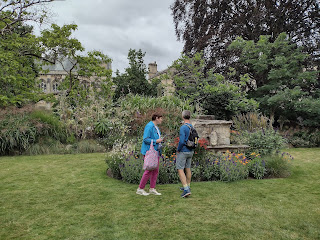 I took an artie selfie in front of a sundial that commemorated 30 years of female students at the college. Seeing that Balliol was founded in 1263, it was disappointing that out of 758 years of education, women have only been allowed in for 43 of those. 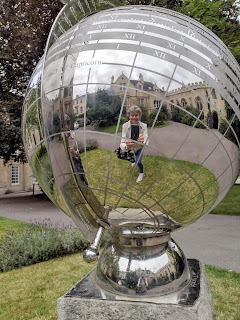 But it is a very nice sundial, although I couldn't check the time as the weather was too cloudy.
We also walked along the river, saw the beautiful boathouses and watched some terrible attempts at people punting along the river. No one fell in, but there was a lot of crashing into the banks. 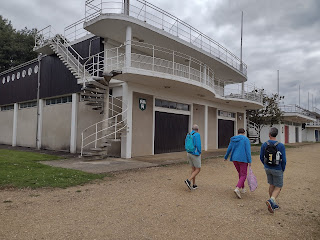 Finally, we visited the tiny shop that was the inspiration for one of the scenes in Alice in Wonderland. Unfortunately non of us had read Lewis Carroll's classic masterpiece, but apparently Alice finds herself 'in a little dark shop, leaning with her elbows on the counter, and opposite to her was an old Sheep, sitting in an arm-chair knitting'. 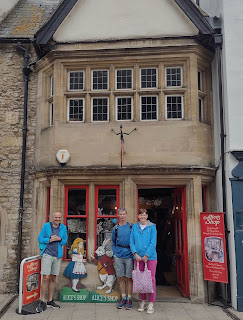