On our last visit to Oxford I bought a guide book as I was very keen to learn more about the area. 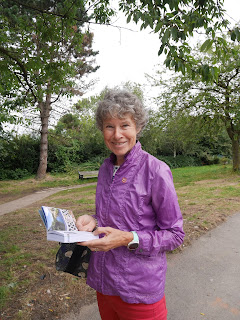 We split the tasks up very fairly, and I walked and read out aloud and Darren took the photos. I am not sure that he listened to all of it, but when we stopped to admire the view the local geese were very interested to hear about the building just behind them. 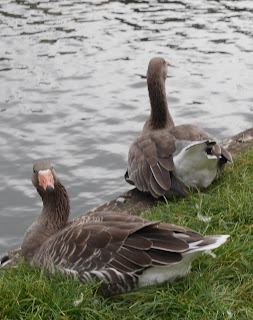 It was a very good building, actually, the Electric Lighting Station and it was built to impress. It provided electricity to the town and university and had steam driven turbines fuelled by coal. 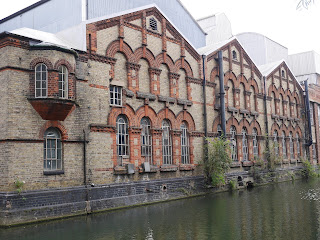 Warm water was pumped back in to the river and local people swam in it all year and there was even a diving board on the opposite bank. It's no longer there now, but there was a very interesting modern house being built that was in the papers only a few days ago and apparently all of the locals really dislike it. 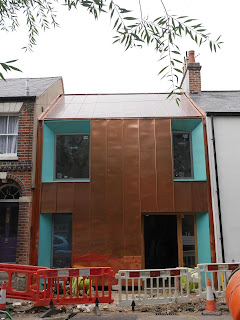 We liked it a lot.

Altogether there was 42 stops on our route and only a couple of disappointments. We could not find the Inspector Morse plaque outside of the Thames Valley Police headquarters, or an obelisk by the river, and to be honest, the giant wooden hand with fingers and a thumb emerging from the ground needed quite a bit of repair work. 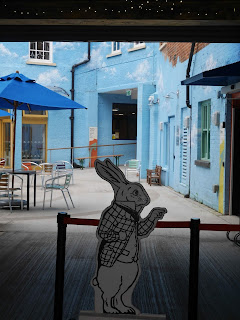 However, we saw some more good Alice in Wonderland stuff, and Grandpont House where the former mayor, Thomas Randall used to live who may have been the inspiration for the Mad Hatter character in the book.

We finished the route just in time to get to the theatre to see Blood Brothers, but a member of the cast had been taken ill and so they had cancelled it. Never mind, we have rebooked for tomorrow night.