We arrived quite late last night, but were really impressed with the cycle paths around the airport. This morning we cycled along them again, and almost before we knew it, we had travelled 20 kilometres and were at Loughborough.

The downside was that the route was along the sides of the main roads, so not scenic.

Things did improve on the outskirts of Leicester and we joined the Watermeadow Route in to town. 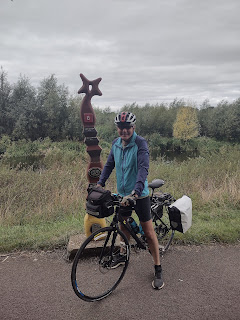 Behind Darren is another cycle signpost, but we came across it from a strange angle and from a distance I thought that it was a giraffe sitting down on our trail, so that was a bit disappointing.
Carrying on, we found some nice murals,and maybe you are starting to think that today wasn't very exciting. 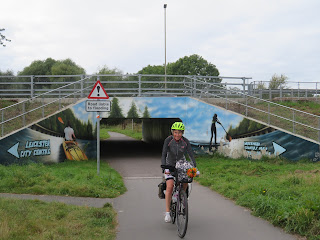 That may be true, but the weather was good, the cycling mostly flat and easy, and was just the tonic after yesterday.

We were on target to arrive very early at our hotel, but Darren's bike had other ideas and he had another major mechanical, with another trip to a local bike shop to pick up replacement parts. This time it was the brakes causing problems, but seeing as they are essential, then we couldn't carry on until they were fixed. 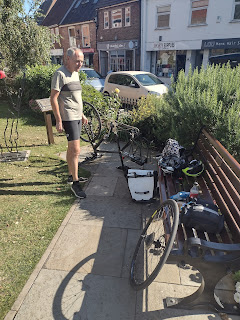 A little robin was very keen to see what Darren was up to and he sat really close to the bike and we fed him little pieces of our cheese and pickle cob. 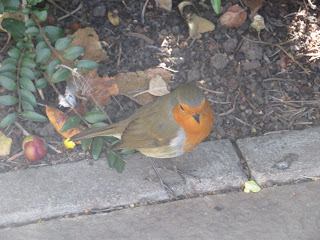