Another tour of Oxford

Back to Oxford again, and we are on another walking tour from my guide book. This one starts on Broad Street, where we have stopped on many previous visits, but have never known much about the incredible buildings.

All that changed today with my guidebook, and we started at the far end and the Indian Institute. 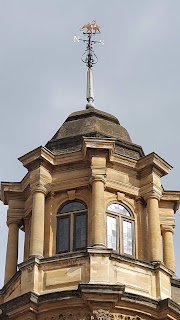 Built with support from Queen Victoria it has friezes of elephants, lions and water buffaloes around the outside of the tower, and an elephant weather vane on the top. Unfortunately there wasn't enough funding to pay for the up keep of it, so to the dismay of the Indian Government it is now part of the Modern History Faculty.

Across the road is the Clarendon Building, built by the first Earl of Clarendon in 1713. We couldn't find the statue of him looking very pompous, but we walked through the gates and behind it is a fantastic square. We don't know anything about it though because it is on another tour which I haven't read yet. However, I definitely will soon. 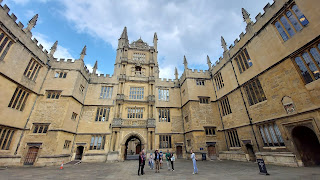 Back to our tour, and next door is the Sheldonian Theatre. It never actually was a theatre so the name is very misleading, but the best bit is the Roman Emporer Heads surrounding it. The Theatre was designed by Sir Christopher Wren and he was very disappointed with the budget that he was allocated, so apparently he asked the sculptor of the heads to give them really surprised looks on their faces. This was meant to be a coded sign to signify their, and Wren's disapproval of the benefactor.
(By the way, my niece has traced our family tree, and apparently our great, great, great, great, great, great, great, great, great grandad was Sir Christopher Wren, so from now on I will refer to him as Grandad.)
On the other side of the road is Blackwells Bookshop, where Morse and his side kick Lewis used to visit. It also has the largest bookselling room in the world. Given that it doesn't look very big, Darren was very sceptical of this claim until we went inside and down some stairs to the Norrington Room. It was excavated under the Trinity College grounds in the 1960's and it is huge, with tiers leading down to separate areas, all filled with books. 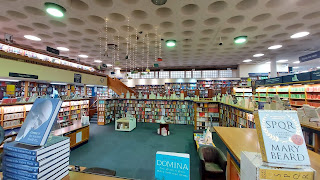 Back above ground we admired a wildflower meadow and beautiful old buildings of Trinity College. 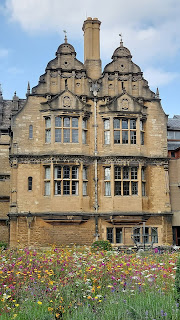 Right next door is Balliol College where we went last week with Elaine and Mark, and opposite is an Antony Gormley statue on a roof, plus the first ever Oxfam shop, set up in the 1940's.
Quite a street really.
Eventually we set off along Turl Street and found many more interesting buildings and facts.
There was a good mural in the covered market and we were getting tired by now. 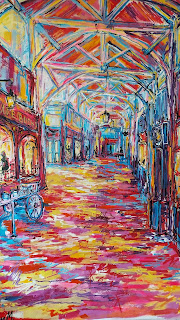 We stopped for dinner and a glass of wine before heading to the Theatre for the delayed Blood Brothers event. We enjoyed the first half, but then decided that we had seen enough, had a lovely long day and caught the train home.