A bit of excitement on Sunday afternoon when we hosted the first Gardening Club event at Graven Hill. I rediscovered the red marker pen and put the details on Facebook, but we didn't know how many people would actually turn up on the afternoon. 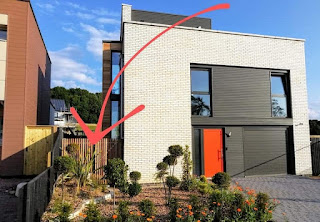 Darren was going to be on tea and coffee making duty, while I was down for welcoming and introductions. This went well for about the first five minutes as two people arrived and they got their drinks. Then about another ten people turned up together and we gave up with the drinks and also unfortunately, trying to remember everybody's names.

After a bit of a formal start I started to relax as people wandered around the garden chatting in small groups, and more people kept arriving in ones and twos until there was at least 25 to 30 people in all. I gave little tours of the pond and greenhouse and tried my best to give out little snippits of advice, sort of in a Monty Don kind of way. 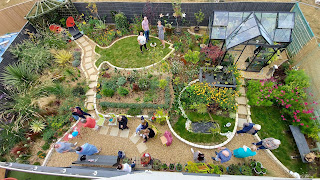 Darren stayed inside and took a photo from the roof terrace that he put on Facebook with a message to say that there was still time to nip along to the event. One guy came specially just because he wanted to see the fish lawn!

Nobody else who was there noticed it and I didn't think to mention it, but later we got loads of comments about it online so that was quite funny.

The whole thing went really well and we have already arranged the date for the next meeting, while we are chomping our way through the cakes that we bought to eat with the drinks that we didn't get round to serving.