Got up and cycled across London to Kings Cross station for our train to York. We parked our bikes next to the statue of Sir Nigel Gresley, who designed the Flying Scotsman, and I stood and waited with him while Darren went to fetch coffee and breakfast.

Sir Nigel has quite a disapproving look on his face so I didn't want to stay there too long, and then a man walking past jumped when I moved, and he said that he thought that I was a statue too. Just a bit weird. 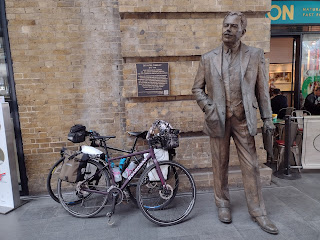 Our train was not the Flying Scotsman, but we really did fly to York. In less than two hours we stepped on to the platform, rolled our bikes to the lift and found that it was out of order. Never mind, you can't have perfection every day, and a friendly lady helped me carry my bike up the stairs. 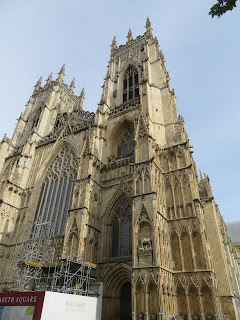 York looked beautiful, and very busy, but we weren't staying there - way too expensive - so we set off along south the cycle path.

A huge amount of care and effort has gone in to this path and it was called Sustrans route 65, the Transpennine Trail and part way along it also becomes the Solar System Superhighway. I was surprised by the first signpost as I was expecting it to say how far it was to Selby, but it actually said something like Venus 500,000 miles. 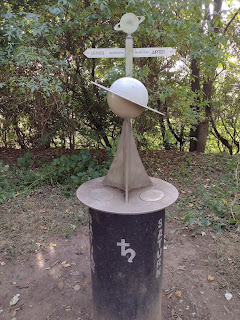 At each signpost the distances got further and further with this one saying over one billion miles from Saturn to Uranus. 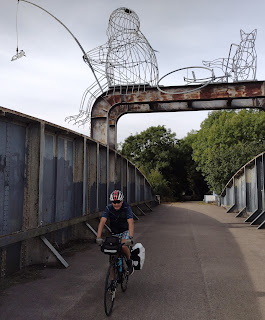 Some more art on a bridge over a river, and I think that the fisherman has caught a rocket instead of a fish.

Then we met our friends Alex and Han who were cycling north to rendezvous with us, and they took us to their house for proper coffee and cake.

Finally, the last few kilometres to our hotel in Hambleton, which is actually a room above a very nice pub.