Today we drove to the Chilterns, and the starting point of our walk was Dunstable Downs. A lovely spot with views over the Vale of Aylesbury towards Oxfordshire and the Cotswolds. Not sure that we could see all of that today because it was a bit hazy, but well worth the hour long drive to get there. 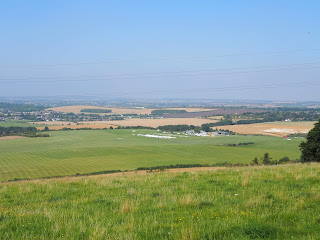 We started our walk, me with the guide book and Darren with the route downloaded on to his phone. 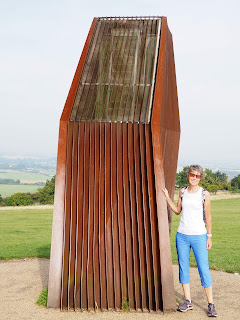 We both separately worked out which direction to go to start the walk. I knew that we needed to go left, but Darren went right and I didn't want to point out the mistake so quietly followed him. After a few minutes we turned right across the main road and down a little track towards a quarry. Glad that I didn't make a fuss as he was right all along, still not sure what happened.

Anyway, the guide book said to walk around the rim of Kensworth Quarry, the largest and possibly last chalk quarry in the Chilterns. At first it was hidden behind trees, but suddenly it appeared. It was absolutely huge with what looked like Tonka Toys scuttling all over it. 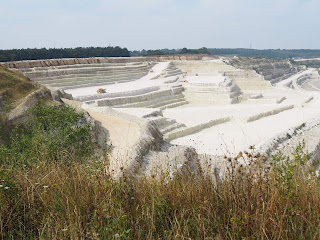 We carried on to a village called Studham which had a cathedral of trees. It was created after the first World War to commemorative the those who died, and the shape of a large cathedral has been grown from trees and hedges with all of the usual rooms and the alter. 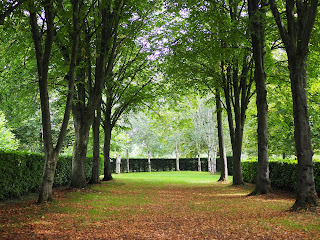 It is now reaching maturity and was a very peaceful place, although it is on the flight path from Luton Airport and a surprising number of planes passed overhead.

We carried on and then skirted the perimeter fence for Whipsnade Wild Animal Park. Apparently there was a chance that we might see some of them, I was hoping to see elephants while Darren was keen to see giraffes. However, what we actually did find was two rabbity/deery creatures. 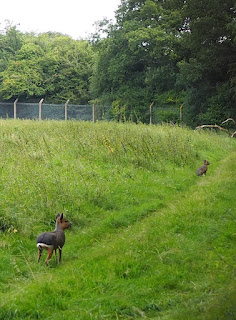 On to the final stretch and then we were back at the start in just over 14 interesting kilometres. 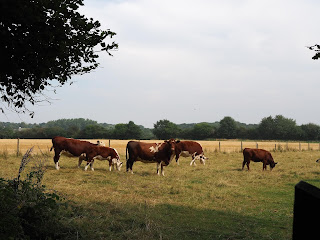 Ps, I forgot to say that this time we did make it through a field of cows this time.