Yesterday we caught the train from Birmingham to Bristol and then set off from the station on to the Sustrans cycle route. It goes along a disused train line almost straight to our cottage.

This is the very start of the route as it leaves the station, and at this exact moment I am very happy and totally convinced that we are about to have an easy journey.

Fifty metres later we turned right instead of going straight on, lost the route completely and cycled in the wrong direction with occasional stops for me to try and find the right way on my phone. At length we do find it and have a rather subdued journey here.

This morning we are tackling the worrying issue of how to cut down the overgrown plants that are cascading into the river at the bottom of the garden.

Surprisingly, Darren has brought a harness and he had the amazing idea of attaching it to next doors fence. 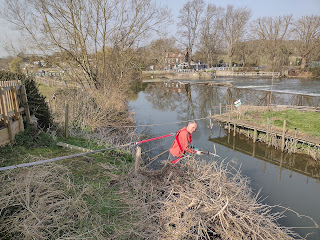 He then was able to lean out over the river and cut the branches off. It was my job to haul them up on to the bank behind us. 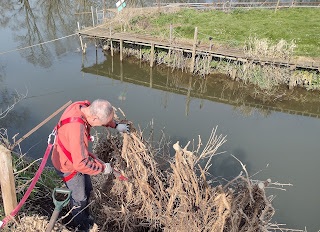 This worked well for a while until it became obvious that I wasn't very good at dragging branches up the bank and Darren wasn't so flexible to lean down and cut the lower branches off.

So we swapped jobs. I ended up right down at river level desperately swinging on the harness, while Darren took on my job.

No photos of this, but an interesting comment from Darren as I kept getting tangled up in the harness. At one time I had twisted 360 degrees and was in more danger of strangling myself than falling in. Anyway, he remarked that if I was a dog on a lead then I would be one of those that runs rings round their owners and trips them up. Not sure if this is very complimentary.

Ps, we did manage to get nearly all of it done though.