On the flight path

After speaking to our neighbours we were surprised to find that our cottage is directly on the flight path of an airport.

I assumed that they meant Bristol airport with planes going over at 30,000 feet, and Darren thought that they were mistaken and actually should have said 'flood plain'.

No, we are actually extremely close to Saltford air field. Obviously, it is not exactly Gatwick, but we set off on a footpath this morning to have a look.

We followed the river for about a mile and passed another lock and weir very similar to our own. 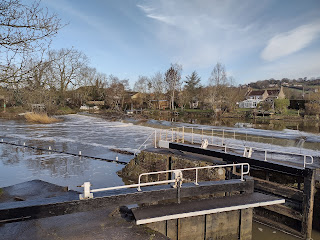 This one had a huge tree stuck on the weir that must have fallen in the river after the storms last week. We carried on uphill and found a windsock. 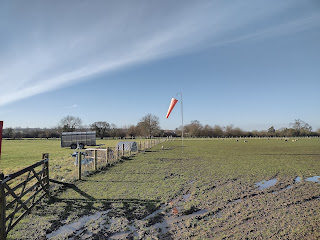 When we first got there it was surrounded by sheep and their lambs, but once they saw us they baaed angrily at us and ran off, presumably towards the check in counters.

The footpath goes straight across the runway, but not to worry, there is a warning sign saying not to walk across if an aeroplane is approaching. Good call I think. 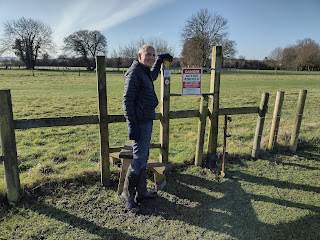 The runway is grass, and disappears down a slope almost straight towards our house. 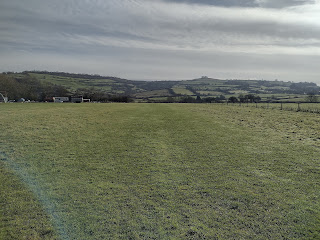 When we got back I tried to find a timetable online, but there was nothing. The neighbours say that it is used on Sunday afternoons in the summer by vintage planes, and they take off and land very low over the cottages and the river. Apparently it is very exciting and sometimes worrying to watch.

Ps, it said online that in August 2020 a tiny plane misjudged its landing, tipped on its side, hit a hedge and the wing fell off. In the pilot's incident report he said that it is a difficult runway to land on requiring a lot of concentration, and the crosswind surprised him which is how he ended up in trouble. Luckily neither him or his passenger was injured.

Looking forward to the summer.