Cadiz in the rain

This is the view from our balcony in Cadiz when I opened the curtains this morning. 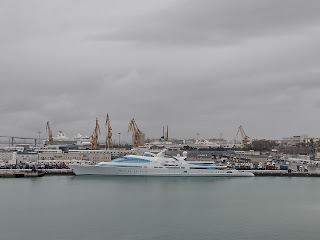 There are two points to talk about in the photo, firstly the weather and secondly the boat.

Starting with the weather, it is cold, wet and raining. This is very disappointing as I have been checking the weather in Cadiz daily since the beginning of February and every day has been warm and sunny. It is also due to be dry again from tomorrow for the foreseeable future!

Yesterday the weather was even stranger as the sky turned orange and when the sun tried to peep through it was blue. Why didn't I take a photo? Because I was so surprised that I just stared instead, and I am very disappointed in myself.

The captain made an announcement over the tannoy later to explain that storms in north Africa had blown sand into the air, and then the Scirocco winds from Spain had created this amazing phenomenon which I have no picture of.

Anyway, getting back to the view from the balcony. The boat is actually the 11th largest super yacht in the world, called the Yas and it is owned by a prince from the UAE.

Two days ago we were admiring another huge yacht in Barcelona harbour, and that one is on the news today. It is called Valerie is owned by a Russian oligarch, and it was seized by the Spanish authorities this morning.

Getting back to more mundane subjects, we went for a walk in the rain in Cadiz to admire the fortifications and gardens. 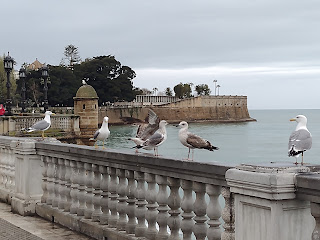 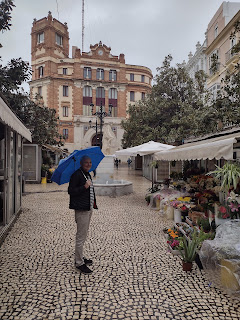