It's still cold, but no rain today and the sky still has a strange orangey tint to it.

Today we are in Lisbon and we are out exploring. We bought a bus and tram day pass and set off first to the Belem Tower This was very apt because it was built in 1519 as the ceremonial gate to Lisbon in the Renaissance, and the embarkation point for Portuguese explorers.

We then sat by a little outdoor coffee shop in a van and bought a very poor cappuccino and a fantastic Portuguese custard tart.

Just a short walk along the waterfront is the Monument of the Discoveries dating from 1960 which features famous explorers, kings, queens and various others, all staring out across the water. 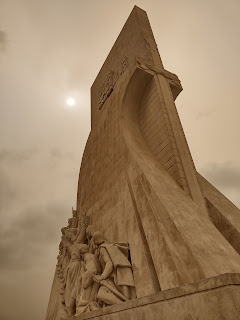 Then we passed an incredible building which is the the Archeological Museum and Jeronimo Monastery.

We then followed a tip off we were given on the bus about the cafe Pasteis de Belem. This is where Portuguese tarts were invented and apparently they make the best ones in the world.

We joined a queue and eventually got two tarts to take away. They were beautifully wrapped and we just needed to find the right place to eat them. 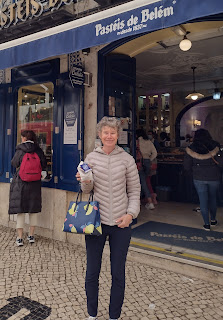 Within a couple of minutes we passed the Botanical Gardens that were featuring an Alice in Wonderland display, so we went in. 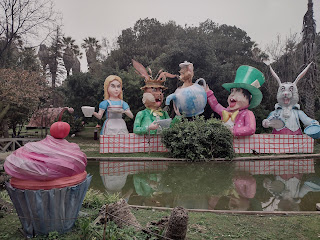 It was totally amazing and we followed the route with quotes from the book and 20 Alice based scenes. 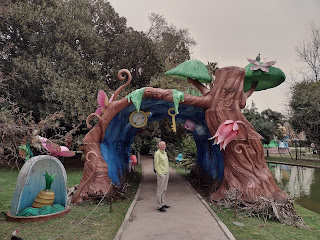 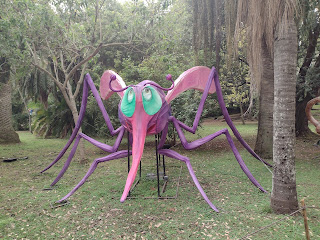 The gardens themselves were full of huge old trees and lots of very overgrown but lovely areas. 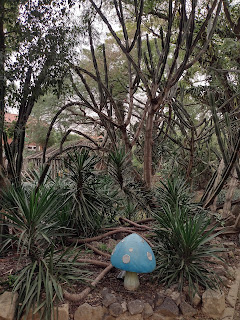 There was hardly anyone else around and we could hear peacocks calling to each other, but at first couldn't find them. Eventually in an overgrown courtyard we found one who was putting on a good show for three lady peacocks although they didn't seem that interested. 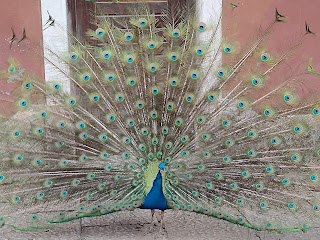 Right at the end we found a strange sight. 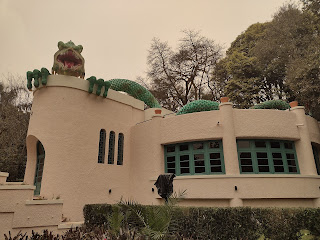 After all that excitement we walked quite a way, took another bus and arrived at the tram stop number 28E. This was our original plan this morning and we tried to get on it in the centre of town but the queue was enormous. We changed tack and decided that it probably wouldn't be as busy in the opposite direction and we easily got a seat. 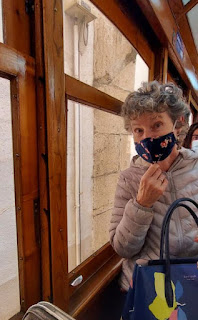 It ended up being quite a long ride on a noisy old tram along narrow streets and tight bends. We thought that it would be the highlight of the day, but although good it ended up at the bottom of a great list. 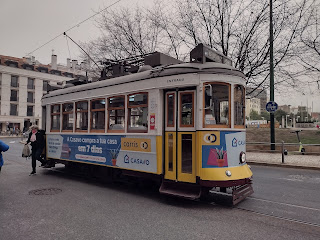 Finally, we ate the tart from Pastries de Belem and it was lovely, but we both thought that first prize went to the tart from the little coffee cart.