Approaching Alicante by sea it is impossible not to be impressed by the huge castle on the hill behind the docks. 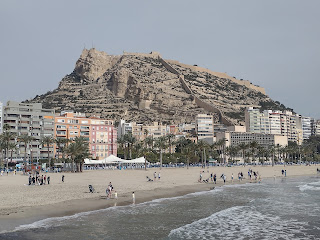 Bronze age and Roman artifacts have been found on the site, but a castle was first built there around 1,200 years ago. 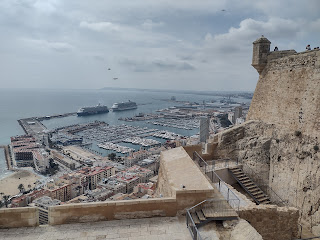 It took us quite a while to walk up the steep paths to get to the only entrance to the fortress, but then we found out that there is actually a lift from street level right into the heart of the building. We could have saved ourselves 166 vertical metres of stair climbing.

It's a good thing that the lift wasn't there in 1709 though, when the English were inside the castle walls and the French held a 46 day siege to try to get them out.

It was also abandoned for many years and then opened to the public in 1961. It is a fantastic place now though and was enjoyed today by lots of our fellow cruise passengers and dozens of Spanish school children.

On the way down we set off along what looked like a small version of the Great Wall of China, 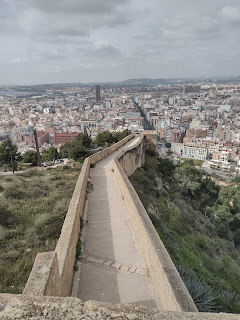 although it was closed part way down so we had to traipse through some flower beds and rejoin the original path to get down to the old town.