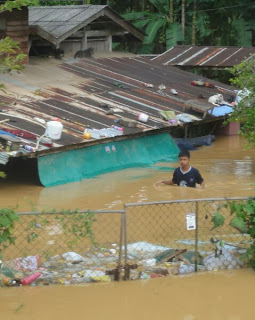 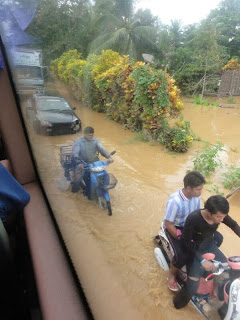 Got up this morning and went to the bus station for our bus to Khao Lak. We had no idea of knowing what might have been happening while we slept, but it turns out that the whole town was also flooded, this time with stranded tourists.
The trains were unable to get in either direction from Chumphon station so had spent the night there and the tourists had spent 12 hours on them while they went nowhere. They were then tipped off with no explanation and they had to fend for themselves.
Also, ferries from the islands had arrived but the weather had been very rough so most of the travellers had been very ill on the crossing and were then left at a bus station all night.
We arrived to find many people trying to get in different directions.
We had to wait while the first bus to Khao Lak tried to make the journey across the country from one coast to the other to see if it was passable.
During the waiting time we decided to see what other options were possible so managed to miss the next bus.
We then had to wait for three hours for the following one, but there were then more people than seats.
In the tussle to get on a sort of fight broke out between two large French guys. One knocked the other over and then forced his way to the bus door. I was just next to him and didn't want him to get in front of me so he pushed me forward at speed and we shot on to bus ahead of most people.
Daz was putting the bags in the hold and I couldn't save him a seat so he had to stand for seven hours  - apart from the couple of hours that he shared a seat with two lovely eastern European girls!
The flooding was really bad but it was draining very quickly and it does happen to some degree every year so most houses and people are prepared for it. I was surprised how many locals waved to us on the bus and sat on top of benches just waiting for the water to subside.