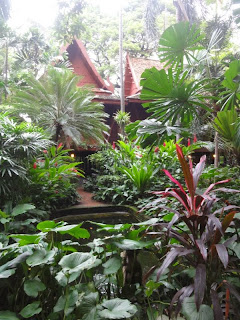 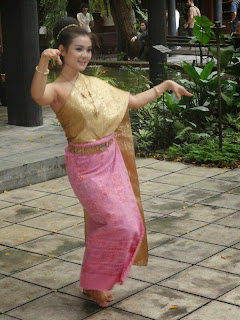 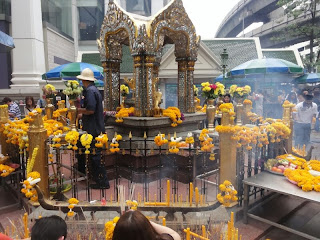 Jim Thompson arrived in Thailand just after the second world war from America.  He helped revive the Thai silk industry, collected many ancient works of art and constructed a beautiful traditional style Thai house by combining six teak buildings into one large mansion.
He moved in in 1959 and mysteriously, Jim went for a short walk in the Malaysian jungle in 1967, never to be seen or heard of again. That is a great shame as it is a beautiful house and leafy garden. In fact it is very difficult to see the house at all.
We then stopped off at the Erewan Shrine.  It is lucky to walk clockwise around it and make a wish. I walked around twice to be on the safe side and left a little yellow garland.
It was very popular and loads of people were putting hundreds of garlands on every available surface.
We arrived just after two men had gathered up all of the existing garlands and filled an enormous dustbin, but now, about ten minutes later, it is already getting quite full again.