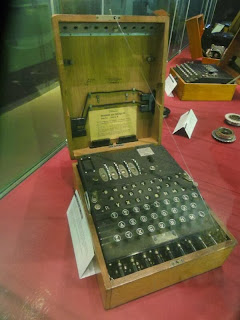 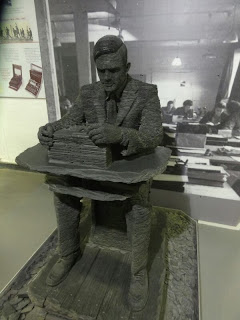 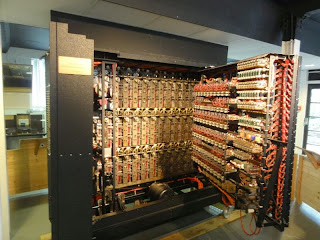 My mission today was to explain the mystery that is a computer in 100 words or less, based on knowledge collected on a visit to Bletchley Park.
Bletchley was where the British set up an enormous secret operation to decipher the secret messages that Nazi's sent to each other during the war.
The Nazi's coded the messages on an Enigma machine (pic 1) and sent them to each other by morse code. The British listened to the morse code messages and learned how to decode them with the help of a Bombe machine (see pic 3) that was designed by Alan Turing (pic 2).
As the war went on the encryption got more and more complicated and the Nazi's started using a machine called a Lorenz, and Turing designed Colossus to offset it - I think.
At some stage the codes had 158 million, million, million options, and the Nazi's changed the codes every day.
Unfortunately, I spent a very long time reading the information boards backwards and did not notice that they were numbered, so I didn't decipher that I should have started at board number 1 and followed it along to 6.
This leads me to believe that I would probably never had been offered a job at Bletchley.
Ps, I cannot define what makes a computer a computer, but my brain is very tired.