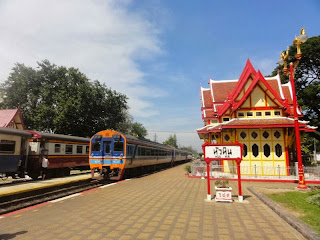 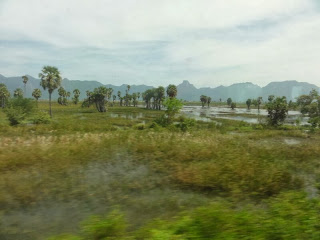 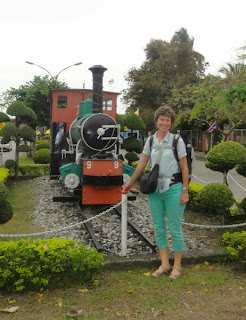 Chumphon is probably not one of the best known towns in Thailand. On trip advisor there are four things to do, two of which nobody has ever reviewed. In fact I think we have already seen most of it on our walk from the station to the hotel.
We caught the fast train from Hua Hin and it was delayed by one hour. We had been planning to catch the cheaper slow train but that was due to be two and a half hours late. There is a helpful board at the station which has the headings 'arrival time', 'delay' and 'real arrival time'. Useful as Thai trains are very unreliable.
We caught a similar train last year and when I sat down the seat back shot downwards and the man behind me was in the middle of eating a curry which landed in his lap. Mindful of this I carefully sat down but our seats were not really attached to the floor and were twisting all over. Daz entertained the old Thai ladies watching us get settled by pretending he was riding a galloping horse.
They all thought it highly amusing.