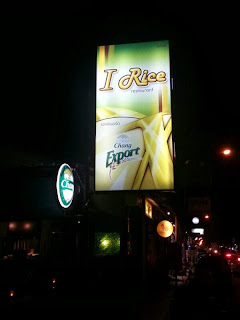 Just been out for dinner at the I-rice restaurant. It started very well with a nice chicken satay to share.
I then ordered prawn noodles and Daz had beef jungle curry.
I tried a mouthful and my lips and tongue
felt as if they were on fire. I sat making goldfish faces for a while, gasping for air.
The waitress came over to ask if we were enjoying our meal, then took mine away to be replaced with something that wasn't as hot as the sun.
Manfully, Daz finished all of his but by then his whole face was numb.
I suggested that I could have had some fillings done and got a tongue stud, while Darren said that I could punch him in the face. However, he has been very well behaved for ages so I didn't take him up on the offer.