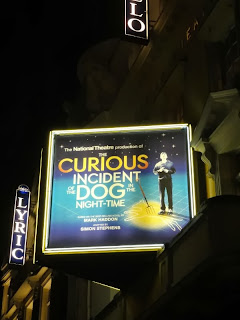 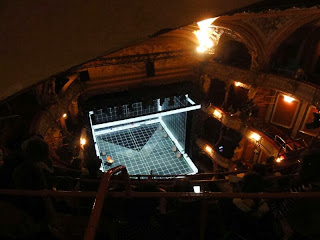 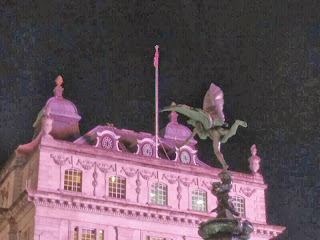 'Up west' last night, as they might say in East enders.
We were out with Darren's mum and dad for a slap up dinner of cocktails and burgers, and then on to a show.
That was where it started to go wrong as we picked the show, and bought the cheapest possible tickets.
'The curious incident of the dog in the night time' is a book that has been turned in to a play. Very briefly, it is about an autistic boy who goes on a train ride to London. Not everyone's cup of tea then.
Our seats were so far back in the theatre that we were above the height of the fancy corniced ceiling. We couldn't get to our seats through the front doors and had to go round the back near the bins to get in.
We were almost vertically above the stage, but the sound didn't carry up to us. Daz and I could hear it okay but the in-laws did not hear a word, neither could they really see what was going on.
They also kept wondering when the singing was going to start.
They were troopers though and stayed until the end, but I think it will be a long time before they let us arrange another night out.
We also passed the Eros statue at Piccadilly Circus. It is surprisingly tiny, and the photo unfortunately  features it's bottom as most of its base was covered in scaffolding so I couldn't get a better shot.