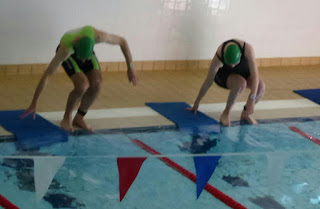 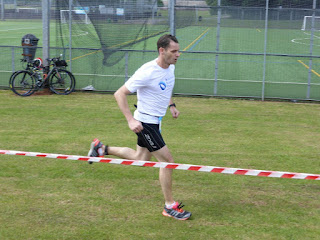 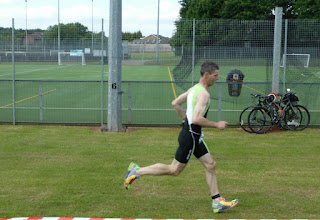 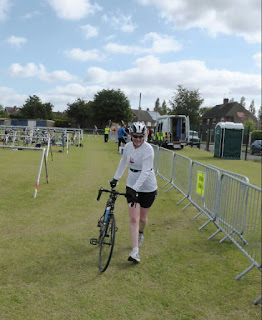 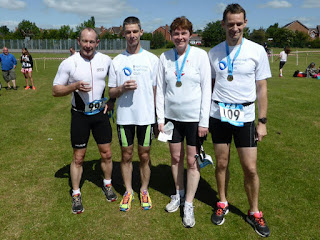 We headed over to Kimberley this morning to watch the family go head to head at Kimberley triathlon.
I was ready with my camera, expecting an exciting diving start. Lined up in a row were my sister Elaine, brother in law Mark, and his brother Pete (unfortunately I zoomed in too much and missed Pete off the shot - pic 1).
Not to worry, as instead of the flying start I expected, they all climbed into the pool and started with a push off the wall.
There was a bet on as to who would be first out of the water, and Elaine was feeling confident.  She was in the lead towards the end of the first lap, but in a very unfortunate twist, she was blocked by a slower swimmer in her lane. The boys overtook her and she never got back in contention.
Pete (pic 2) exited first, Mark (pic 3) was second and Elaine followed behind. I am quite confident that Elaine then took the prize for the person taking the longest time to get dressed in the transition section, but eventually she was on her way out with her bike (pic 4).
Out on the bike course Mark overtook his brother and then shot out for a really speedy run.
Finally, we waited as everyone crossed the finish line with Mark retaining first place.  Pete was a close second, and we had to wait a while, but then a very courageous Elaine, who was by now battling a painful leg injury, came in third.
It was a great effort by everyone, and keep an eye out on this blog in a couple of weeks time, as Daz and I are also thinking of entering the next race!