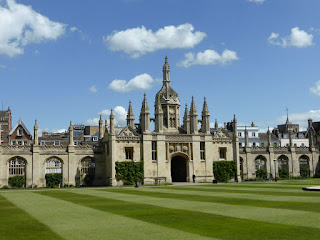 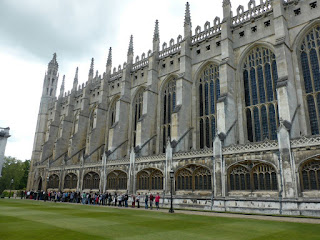 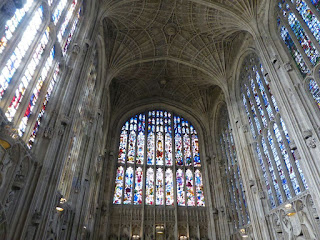 We are in Cambridge today and paid to go on a guided walking tour of the city. The guide told us so many interesting facts that my brain is exploding, and I will try to resist boring you with them here.
However, I will say that the city is a beautiful historic maze of ancient buildings.
The most memorable was King's College Chapel and on previous visits to Cambridge we have stood and admired it from the road, but have never been inside.
The building was started by King Henry VI in 1441, but was not completed until 1515 by Henry VIII. (The war of the Roses amongst others things delayed it.)  Henry VIII then went to great lengths to ensure that it would be the most magnificent Chapel in either Oxford or Cambridge.
The stained glass windows were magnificent and are original from the 16th century.  They were all removed and hidden during World War II to save them from any damage - sorry couldn't help myself on the facts front.
We kept hearing about the excellent choir that sing at Evensong every day, so to end the day we went to the Chapel service to hear them.