Walking the walls at York 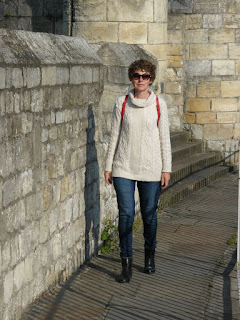 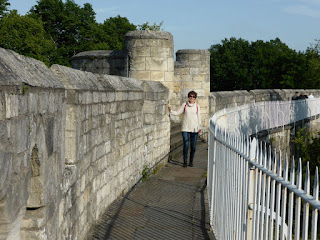 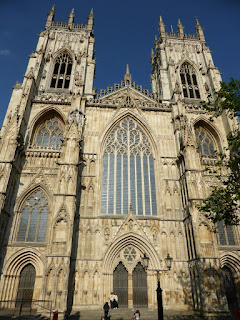 I didn't write a blog yesterday as we got involved with some campervan DIY, and it also rained for most of the day.
However, we did drive from Southport to York and spent last night at our new campsite. It is very well situated, less than ten minutes walk to York and right next to the river.
I noticed with interest that the shower block was raised up on brick pillars and had half a dozen steps up to the facilities.
We understood why when we saw a stone with plaques on it to show the height of recent floods. In 2012 the water would have been about six feet deep all around the campsite, but luckily for us today, the river is well within it's banks.
I read the reviews of York on TripAdvisor, and one of the favourite things to do was a two mile walk around the ancient city walls. They are not a complete loop as there are a few gaps in places.
Some of the comments on TripAdvisor said that they got lost part way round, but I just thought 'thickos' and thought nothing more of it.
Our walk started well - the wall was as expected with ramparts and was along the ridge of a steep bank. There was also little maps and information boards that pointed out Roman remains, etc.
We got at least half way round and enjoyed views of York Minster from on high.  We then had to go down some steps to road level so we went to see the Minster. We retraced our steps, but couldn't find the rest of the wall!
We wandered around for quite a while, lost patience with the whole thing so set off home, only to find the wall again on the other side of the river right near our campsite.
A little bit annoying really.