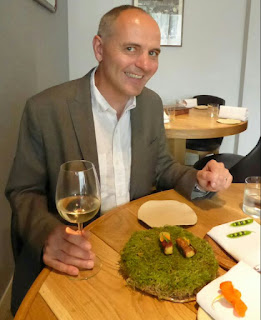 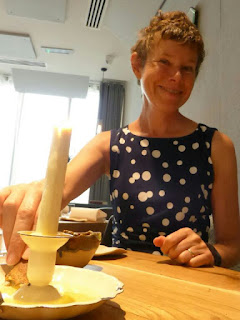 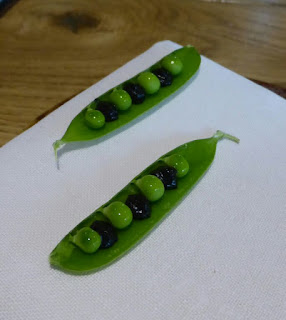 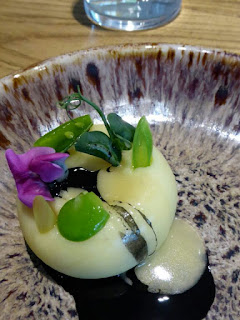 Well it's Darren's birthday today, and we are out for a special meal in London. It is called Restaurant Story and we opted for the Full Story menu.
The chef used to work for Heston Blumenthal at the Fat Duck, and we had about 20 individual dishes, lots of which were tiny and unexpected.
The pea pods were a good example as we had one pod each and half of the green peas were still peas, but the darker 'peas' were something totally different - sorry but I have no idea what. There was a real purple flower with something tasty in the middle, and a piece of turf with allegedly two rabbits feet on it. (They tasted a bit like tiny kebabs.)
There was bread and dripping with the dripping served as a lit candle - pic 2. To be honest butter was probably more tasty, but try turning half a pound of butter into a candle.
We got a crab claw filled with cream cheese and crab meat on a bed of seaweed and stones. Embarrassingly I ate most of my seaweed although Daz said that it was only a decoration. We were quietly arguing about whether it was edible when the manager came over and said that it was just for show, although he tried to make it a positive and said that it should actually be quite good for me.
The dishes kept on coming and we had a bit of raw scallop, some black pudding and other delicacies that I would normally not touch. Nearly all were lovely, but it was a special occasion so I am not going to expand my palate in real life.
There was also beef, lamb, mashed potato (see photo 4), strawberries, lemons, almond and dill, etc, etc.
It was a grand day out and a memorable experience.
Happy birthday Darren x