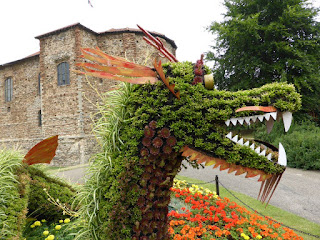 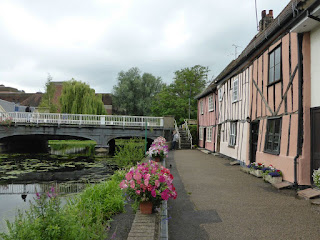 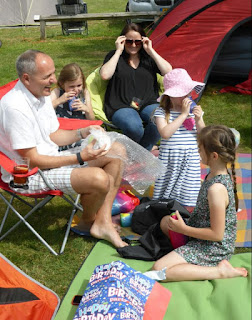 We have just spent the last two days in Colchester, and if I am being honest, don't worry if you haven't been there, as it could fairly easily be missed.
I knew that it was once a famous town, and in fact, it was the Roman capital of England almost 2,000 years ago.
Unfortunately, there is almost no trace of the buildings and statues, as over the centuries they have all been dismantled and used to make new buildings.
A castle that was built from recycled Roman stones and bricks is almost 1,000 years old stands on top of what once was the Temple of Claudius.
We went on a guided tour and found that the Roman theatre is hidden underneath modern houses, the racecourse is underground near the Main Street, and no one knows what has happened to the Coliseum.
Highlight of the day was a beautiful flower bed with a dragon emerging from the greenery right in front of the castle.
On the way back to the campsite we also walked along a river filled with water lilies next to a few ancient wooden houses.
To brighten up the blog I am including a photo from last weekend of Darren opening one of his birthday presents with the help of three or his nieces - aaaaah.