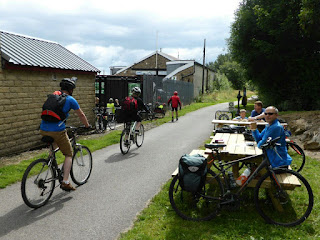 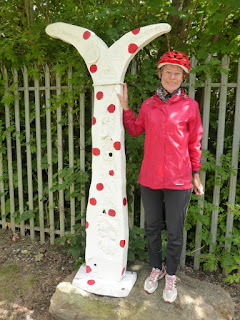 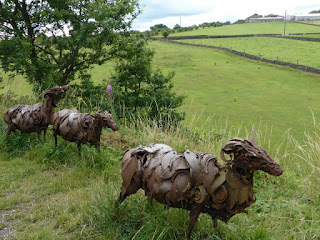 We set off on our travels today and in response to the better weather, we became very laid back.
Firstly we stopped for breakfast at an out of town shopping centre near Bradford.
Then we cycled a few miles on a disused railway line and came across a beautiful mirage - a cafe with outdoor tables, cappuccinos and coca cola cake. We stopped a while and noticed that every single cyclist that passed by stopped as well.
We followed a Sustrans route and saw one of their marker signs painted in the colours of the Tour de France king of the mountains jersey.
Most of our route was on cycle paths and was very scenic, but that also meant that it was very slow and energy sapping, over lots of rough ground, cobbles and hills.
We also enjoyed lots of outdoor sculptures along the route including a flock of rusty metal sheep.
After only a little over half way we were feeling really tired and looking forward to lunch and we found a pub beer garden that seemed perfect. Unfortunately, they weren't serving food so we had a cider each, and I found some almonds in my bag, while Daz rustled up some sugary wiggly worms.
It wasn't the biggest lunch ever, but afterwards I was raring to go and we set off again on the Trans Pennine Track.
It was a very long way with a massive hill to finish, but we arrived at Rotherham and have a room with a view of Morrisons, Macdonalds and Domino's pizza. At least we won't be going hungry tonight.