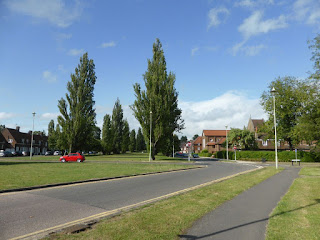 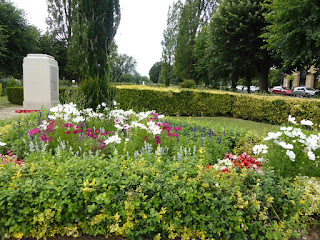 For some reason, I really fancied visiting Welwyn Garden City. I liked the way that the second W was silent and I am always keen on gardens - and most cities.
Unfortunately, the Internet showed almost no attractions in the city, and the only people that I met who had actually been there wondered why I would want to visit.
On our arrival today, our campsite on the outskirts of the city was fine, but our walk into the centre was only memorable because a gigantic dog growled and then tried to attack us. I had to run into someone's front garden and then dog's owner had a go at me for being frightened and therefore upsetting her dog! I had to climb over the wall into the garden next door to avoid going back near the dog and owner, and then we had a bit of a verbal disagreement, as I headed off to safety down the street.
Once we arrived in town we found streets with lots of wide grassy roundabouts and verges. There was some nice flower beds and Sainburys was putting in a green wall on the side of their supermarket.
That was about as exciting as it got.
It also turns out that it isn't actually a city, but only a town, and it wasn't even England's first 'Garden City' as that honour went to another town nearby. (Letchworth Garden City apparently)