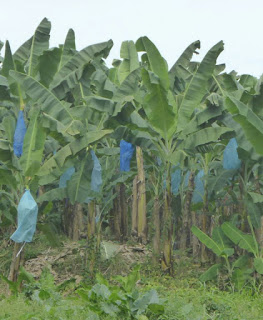 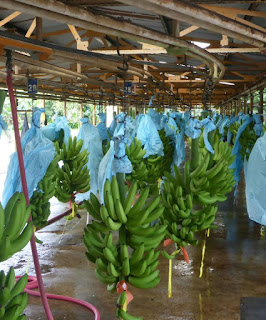 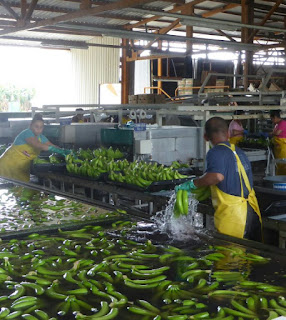 Whilst in Costa Rica we also went to visit a banana plantation. It cost a dollar to look around and we were given a Del Monte sticker to prove that we had paid.
The huge banana plants surrounded us, probably for miles in each direction and each giant finger of bananas was wrapped in a blue bag to protect it.
There was a pully system among the plants and workers were cutting down the fingers, putting them on hooks and then pulling them in long trains to the packing station.
There they were broken up into bunches and put into big tanks of water. They made their way slowly along the tank and workers pulled them out, then put them onto trays on a conveyor belt.
The bananas were then sent along and each bunch was given a Del Monte sticker. Finally they were packed into boxes and were then ready to be transported all over the world.
We watched for quite a while and the pace was relentless. The work was heavy and tiring, although our guide said that they were well paid, which I hope is true.
Afterwards we drove a couple of miles to a roadside fruit stall. All along the front were fingers of bananas and our guide told us to just help ourselves. Also, everyone who came to the stall grabbed a banana and ate them while they were buying the other fruits. I assume that they were all Del Monte rejects, and were just given away, but they tasted amazing - warm, ripe and super sweet.