Today we set off in the rain to hike around the McRitchie Reservoir. We got off the bus, got ready, set up our watches to record the route and then walked about 100 metres where we stopped at a café.
After a tasty breakfast we started the watches again, and this time it had just about stopped raining. Not that we could really tell though because our track took us straight into the jungle. 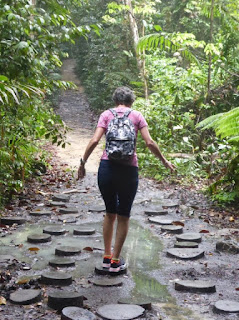 We marched along and at about the halfway point we reached the suspension bridge. A ranger was at the start of the bridge waving around a large stick and when we got closer we realised that he was trying to scare away a large monkey. The monkey didn't seem concerned at all and sat on a branch about ten feet above the bridge.
He assured us that it was safe and he kept an eye on the monkey as we walked under it. The bridge was great, very high and a bit bouncy and we enjoyed the view as we slowly walked across. 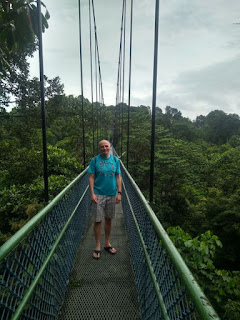 After a while I looked back and realised that the monkey was following us along the bridge and although it was funny at first  the monkey started to speed up so we rushed to the end. 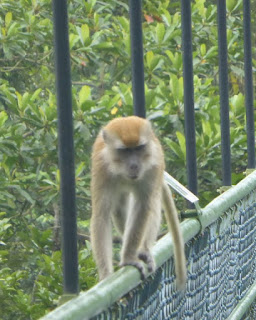 It then followed us along the path, but disappeared into the undergrowth. A couple of minutes later our route turned accorner and there was a huge commotion in the trees - we were being stalked! It all got a bit scary, but nothing attacked us.
A little while later we met up with two girls who it had attacked and tried to steal their backpacks.
Fortunately we made it out alive and saw an otter, big lizard and interesting birds on the way to the bus stop. 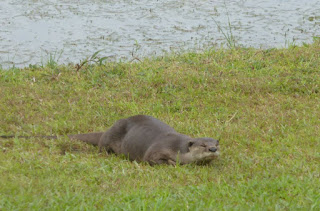