About 15 years ago I went on a week long plastering course and by the end of it I had come to two conclusions. Firstly that plastering is a very skilful job, and secondly that I was quite rubbish at it.
I also went on a one week bricklaying course, but that is another story.
I did pick up some tips though, and over the years I have often repaired small pieces of damaged plaster. I also nearly always then covered my work over with either tiling or wallpaper, so it always looked okay.
I don't think that this experience qualifies me to drywall, as I think they call it in America, or tape and joint the whole house, but I am thinking of giving it a go.
I have watched a lot of you tube instructions, and bought a load of tools and I am trying out my skills in the en suite bathroom. I am on day two today, and am noticeably better than yesterday, but I am not sure yet if my work is going to be acceptable.
I do hope so because it will give us a lot more control over the build, and save a lot of money. 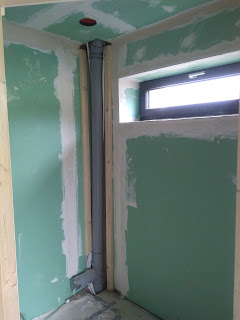 Meanwhile, Darren has been trying out plasterboarding, and today he did the living room ceiling. I also helped a bit by hoisting the boards over my head and then holding them in place while Darren screwed them in. 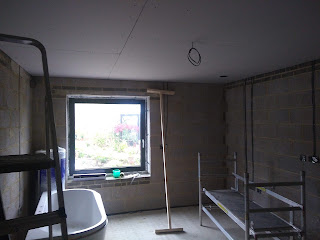 I have to admit that I was helped in this task by a dead man, as apparently it is called, which is a long stick of wood that you push up against the ceiling to help take the weight. He is there, right in the middle of the above photo.
Personally I am trying to stay gender neutral so they are now known as the dead person.
Posted by Christine at 10:40