It's a beautiful summer Sunday, but work today as usual.
I started with acid washing the bricks on the side of the house. I did most of the house while the scaffolding was still up, and I hoped that the terrible weather would scrub the bits that I couldn't reach. However, that wasn't happening and there was still some sections that needed doing.
Up on the ladder for a couple of hours, but I can tell the difference. 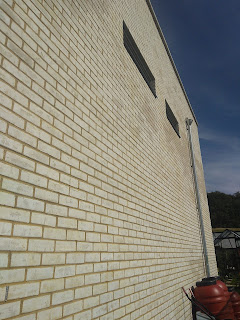 Next job was painting uv protection oil on to the cladding that still needs to be attached to the house. We decided that it would be easier to get one coat on now, and the second on the house when it is finished.
There was quite a lot, but that's another thing done. 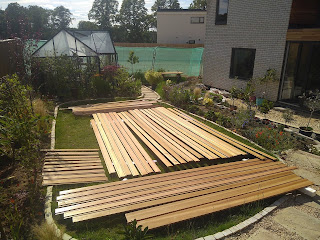 This afternoon I started a new job that I am not yet very good at, and that I already know that I don't like much, but it needs to be done.
It's attaching armoured metal in front of the electric cables to avoid them accidentally being pierced when putting up pictures, etc in the future.
Daz is working on this too and this is a photo of some of his work. 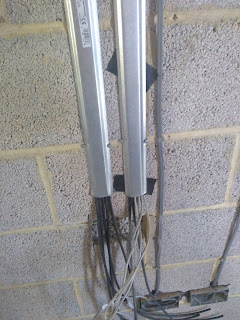 I am not this advanced yet and have only covered a maximum of two wires at the same time.
Posted by Christine at 12:39