Racing to, and in Lausanne 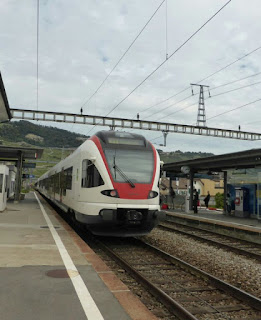 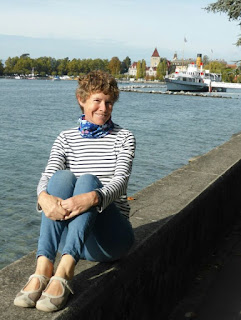 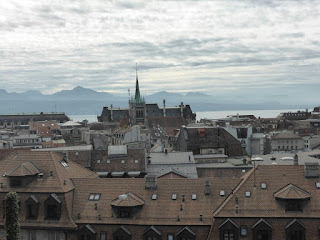 I glanced at Google this morning and saw that there was a train leaving the station near us in 12 minutes. We charged out of the van and ran down the road, looking for the station. As we rounded a corner we could see it in the distance so I upped the pace, charged down the steps onto the platform, realised that we needed to go in the opposite direction so sprinted through the underpass and up the other side.
We had a good four minutes to spare but there was no ticket machine. Darren said that there was one back on the other platform, but that would mean missing the train. What to do?  We decided to catch the train without tickets. No conductor or ticket inspector appeared, so we got to Lausanne without paying, but we had an anxious journey and I was glad to get off.
Lausanne is the official Capital of the Olympics, as the organisation is based there and we went to the Olympic Museum. There was a great exhibit in the grounds - a 100 metre race track with lights down the side that lit up to show how fast Usain Bolt ran it in the Olympic final.
Other people were running down the track following the lights and I tried it twice but the lights just wouldn't come on for me.
Daz said that it was because I started so slowly that the system didn't even realise that I was racing, but I felt like a really speedy hare, so I can't understand it.
Afterwards we had a look around the town and admired the views of the lake over the rooftops.
We then walked to the station, bought our tickets for the train back, only to find that it was leaving in two minutes time.
For the third time in one day I sprinted, this time through a shopping centre, up some stairs and onto the wrong end of the platform. We then ran towards the back of the train and I overtook a lady who was also racing, and we smiled at each other as we jumped onto the train.
Needless to say, we enjoyed a much more relaxed journey home.