Annecy - Venice of the Alps 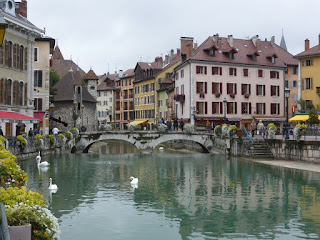 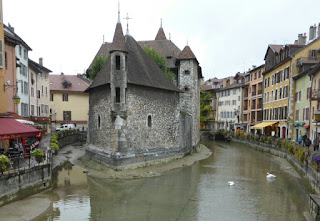 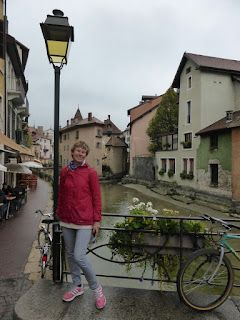 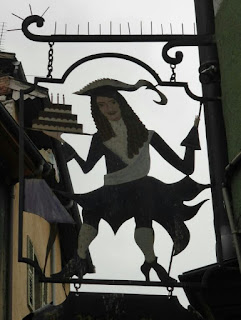 According to the travel broch, Annecy is sometimes known as the 'Venice of the Alps'. We have visited lots of towns that are known as 'Venice of the somewhere' and it seems that the only criteria for the title are a couple of canals, but Annecy pulls it off quite well.
It has a very pretty old town with a good amount of running through it. We enjoyed wandering around, following a walking route provided by the Tourist Information Office.
They also said that the coffee and cakes were good at the Imperial Palace Hotel on the waterfront. We checked out the menu and were enticed by 'coffee with three deserts' for €8 each.
The restaurant was very posh and as it was lunchtime everyone else was having a full meal, but the waitress was lovely and took our order.
She explained that we could pick our own deserts, and not just three, but as many as we wanted.  She then took us over to a huge table that was completely filled with every kind of pudding that you could imagine.
They were covered with a giant glass dome that she lifted on a pulley system and then left us to it. Nothing had been touched so all of the cakes were perfect - but someone has to take the first slice. I took the top profiterole off a bowl that was piled high, and then dipped a spoon into the middle of what I thought was chocolate sauce. It was actually chocolate mousse and it left a big, very obvious hole. Darren kept laughing and said that I should have discreetly taken a scoop from round the edge.
The rum babas were great and had a little syringe filled with rum stuck in the top. Daz had a Floating Island and we both had slices of dark chocolate cake, along with other goodies.
Finally, feeling completely stuffed I asked for the bill and strangely, we were only charged for two coffees and one set of puddings - maybe they thought that we hadn't eaten enough to be charged twice.
Whatever the reason, it's good to be back in France.