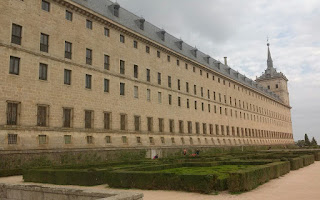 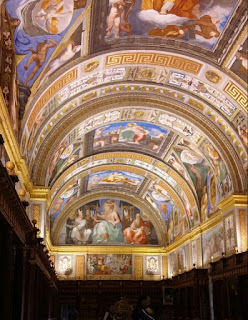 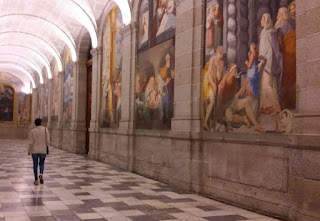 Our campsite appeared to be in an isolated area to the north of Madrid. However, It is enormous place with hundreds of camping so spaces, so there must be a reason why it is here.
We found out today what that reason is. We had never heard of it, but we were within walking distance of San Lorenzo de El Escorial.
It is a royal palace and monastery built by King Philip II in the 1500's. It is a monster of a building and totally dominates the local area.
It has over 1,200 doors, 2500 or more windows, and loads of other facts that we couldn't quite hear on our audio guide. As we walked around we kept bumping into a very loud Spanish tourist guide with her group, and she completely overwhelmed our little tape machine.
We managed to escape her in a few places, one of which was a giant mausoleum that was built under the palace.
It was a very spooky place to visit on Halloween and it held the coffins of almost 500 years of Spanish royalty.
We also visited rooms full of priceless paintings by El Greco, Tintoretto, etc, and  beautiful ceiling frescoes.
Unfortunately, I forgot to take my camera and tried to take photos on my tablet, but I didn't realise that I had put it in video mode. When playing it back I found out that I had made lots of little videos of my feet as I marched around, and in one I am muttering in a very disturbing way to myself.
It's all very odd.
Ps, thanks to Daz for the loan of his photos.