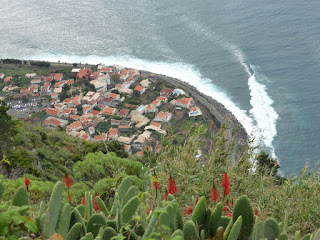 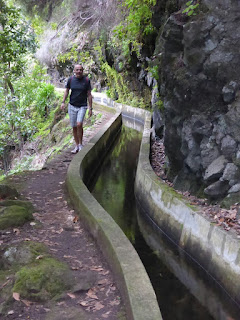 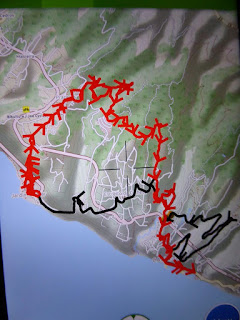 There is one local bus per day from outside our hotel and we caught it as far as Jardim de Mar. It started off very surprisingly as for the three miles or so it drove in the opposite direction to where we were going. It wound around the crazily steep hills, picking up people from the most unlikely looking places. Take a quick look at the black line in pic 3.
Eventually it stopped at the entrance to a long tunnel. We were the only people to get off and we walked into the little village of Jardim de Mar. It is half surrounded by the sea and we could see the big waves crashing onto the shore as we marched uphill following a little track.
Our path took us up about 500 vertical metres to a small picturesque town and the place where we joined a levada. The levadas are waterways that transport precious water from the top of the hills all around the island. They are very pretty things to walk alongside and it was nice to be walking somewhere flat.
Finally we decided that we needed to start heading downhill again and with Daz shouting directions from his Smartwatch, we raced down the tracks. It was so steep that it was impossible to walk so we chugged down taking thousands of tiny steps, but sounding like charging elephants.
Fairly quickly we got back down to sea level and the welcome sight of our hotel.
It is difficult to see on the map, but we walked the red route. It was about 18kms in total and a 30,000+ step day.